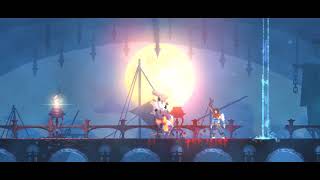 Facetanking Dead Cells: brutality build for 0-2BC (with a little speedrun flavor)

Here is a build which is pretty much broken on low difficulty, and works at least until 2BC. Spite Sword deals insane damage after getting hit, so the strategy is to get hit on purpose to facetank enemies. Detailed tips and timestamps to specific segments below!Note: The facetank part is seen mostly once I reach Ramparts, not so much in the first 2 levels.This is a build I developed back in the 1.1 alpha after they added the new Vengeance mutation. Vengeance gives you 60% DR (damage reduction) and increased dps after getting hit, so I pair it with Spite Sword which deals critical hits after taking damage. This means that whenever I get hit, I get protected against further hits and deal more damage, so I can rally back my lost HP by attacking enemies constantly. In this video, you will see me often taking damage on purpose or just not really trying to avoid all attacks so that I can trigger my critical hits. For example against Concierge, I just constantly attack him when he has the red aura on, and only avoid direct hits. Spite Sword has a very high dps, therefore it can easily stun normal mobs (see 27:17).A good way to trigger criticals is to hold a shield and wait until the enemy hits you. You lose minimal HP and can then unleash your fury. It's actually one of the very rare instances where blocking is useful, whereas usually parrying is best. This means that this build is even viable on 4/5BC: blocking with a shield doesn't give you any malaise so you can still trigger the spite sword crits. Of course it is a lot more dangerous to try this kind of aggressive build at high difficulty. Where it really shines is between 0-2BC. In this video I showed it in 2BC which requires to be careful because of the few flask recharges. But when you do it in 0 or 1BC, you have many recharges and take a lot less damage from enemies, so you can play even more aggresively. -------------------------------The build:* Spite sword (drops from Buzzcutters, the red birds in Ramparts)* Any shield except Parry Shield* 2 panic buttons or 1 panic button + Tonic/Vampirism.* Vengeance mutation* Open Wounds mutation* Recovery mutationA panic button = skill that destroys flying shit and gets you out of apocalyptic situations. If you take only 1, make sure it has a low cooldown (e.g. Infantry Grenade). If you take two like I did in this video, any combination of Powerful Grenade/Infantry Grenade/Knife Dance will work. For mutations, the Vengeance+Recovery combination will allow you to be safe after getting hit the first time and to rally comfortably your lost HP. Then the third mutation is a synergy enabler: Open Wounds makes your sword apply bleed. Therefore, you just need to reroll Spite Sword at the Forge to get +60% on bleeding enemies affix (which is quite common), and that's a +60% dps for you. Note that if you are carrying Knife Dance, you don't need Open Wounds and can replace it with either Instinct of the Master of Arms or Tainted Flask.-------------------------------Some stuff like poison water (not shown) or the shooting crystal elite ability (see 14:50) are basically helping you instead of hurting you, since they deal very little damage but enable Spite crits. The only enemy against which this facetanking build has weaknesses is the Time Keeper: her sword attacks actually stun you even if you block it with a shield (see 23:05), so it's best to avoid getting hit by them. Rather, take a few shurikens in the face to enable your crits.A few notes:* I had full S weapons because I forgot to tone the forge level down in Custom Mode. In a "normal" 2BC run, you likely won't have such weapons and will end up with ++ instead, so that means 3/4 less brutality stats. To try to make up for this advantage, I skipped all cursed chests, didn't explore levels fully and left some scrolls, didn't go to prison Depths, didn't look for any challenge rifts and used the last scroll for HP instead of damage. Despite this, my damage level might have been a bit too high to be entirely representative of a normal run. Still, I have successfully used this build in more natural progression (non-maxed save) on 2BC and it worked just as well. Similarly, I have used it with empty forge on 0 cell and it's more or less impossible to die.* On 2+ BC (like in this video) a shield is required to mitigate damage, but on 0-1BC you can replace it with Hokuto's Bow/Alchemic Carbine if you want -------------------------------Timestamps:2:57 Promenade6:05 Ramparts10:03 Concierge11:35 Stilt Village15:56 Clock Tower22:55 Time Keeper25:05 Castle29:16 HotK-------------------------------More videos of that kind of build:Speedrun on 0 cell :https://www.youtube.com/watch?v=pkuMsrSyqQABloodlust custom mode modifier which makes this build even more ridiculous by enabling permacrits: https://www.youtube.com/watch?v=Qlo68qKz3lw On both of these videos, I had overpowered S gear. But again, it will work even on base gear, just slower.